Living With Hope in a World of Trouble – Part 1 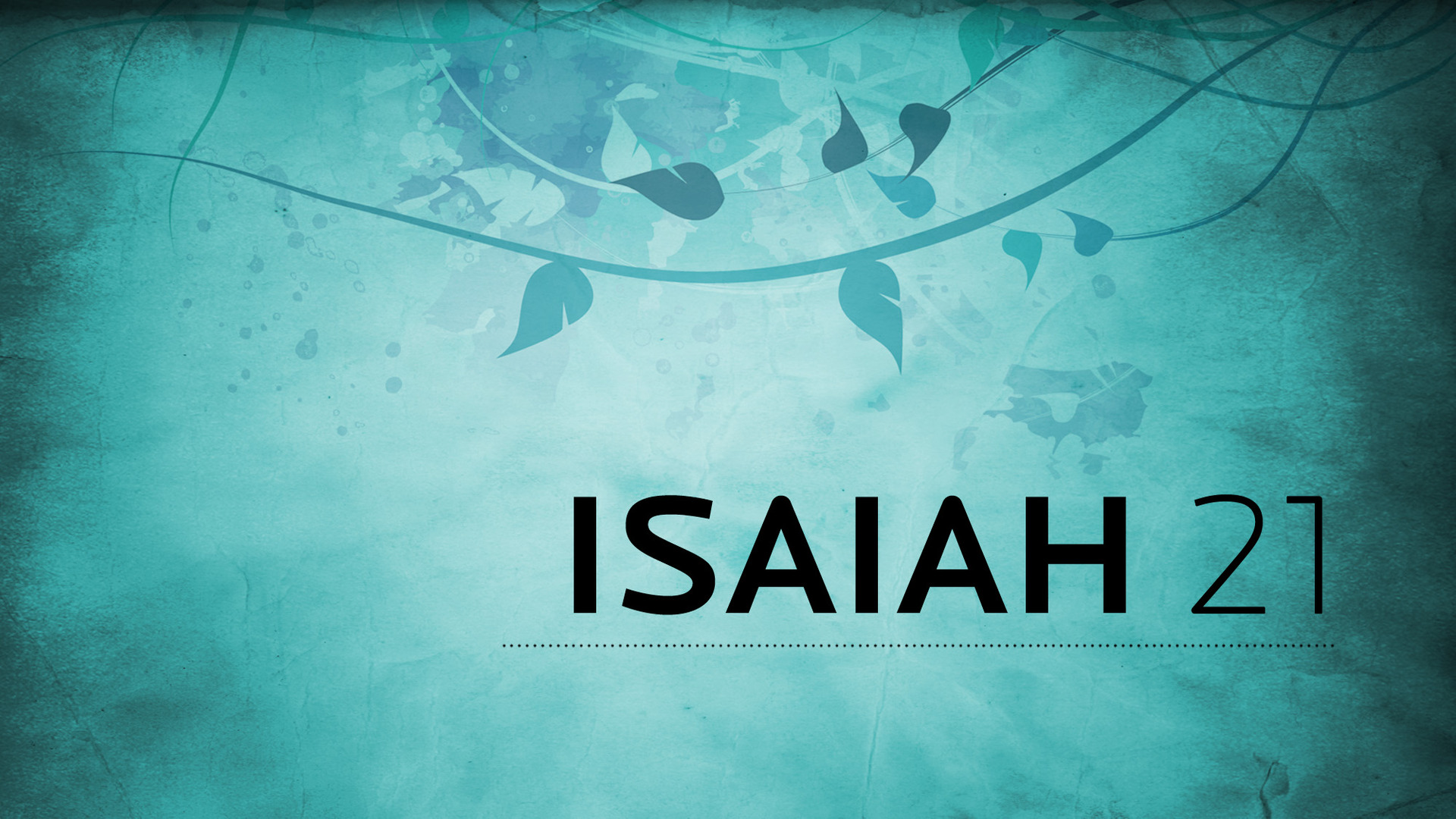 21 The oracle concerning the wilderness of the sea.

As whirlwinds in the Negeb sweep on,
it comes from the wilderness,
from a terrible land.
2 A stern vision is told to me;
the traitor betrays,
and the destroyer destroys.
Go up, O Elam;
lay siege, O Media;
all the sighing she has caused
I bring to an end.
3 Therefore my loins are filled with anguish;
pangs have seized me,
like the pangs of a woman in labor;
I am bowed down so that I cannot hear;
I am dismayed so that I cannot see.
4 My heart staggers; horror has appalled me;
the twilight I longed for
has been turned for me into trembling.
5 They prepare the table,
they spread the rugs,[a]
they eat, they drink.
Arise, O princes;
oil the shield!
6 For thus the Lord said to me:
“Go, set a watchman;
let him announce what he sees.
7 When he sees riders, horsemen in pairs,
riders on donkeys, riders on camels,
let him listen diligently,
very diligently.”
8 Then he who saw cried out:[b]
“Upon a watchtower I stand, O Lord,
continually by day,
and at my post I am stationed
whole nights.
9 And behold, here come riders,
horsemen in pairs!”
And he answered,
“Fallen, fallen is Babylon;
and all the carved images of her gods
he has shattered to the ground.”
10 O my threshed and winnowed one,
what I have heard from the Lord of hosts,
the God of Israel, I announce to you.

In the thickets in Arabia you will lodge,
O caravans of Dedanites.
14 To the thirsty bring water;
meet the fugitive with bread,
O inhabitants of the land of Tema.
15 For they have fled from the swords,
from the drawn sword,
from the bent bow,
and from the press of battle.

16 For thus the Lord said to me, “Within a year, according to the years of a hired worker, all the glory of Kedar will come to an end. 17 And the remainder of the archers of the mighty men of the sons of Kedar will be few, for the Lord, the God of Israel, has spoken.”

22 The oracle concerning the valley of vision.

What do you mean that you have gone up,
all of you, to the housetops,
2 you who are full of shoutings,
tumultuous city, exultant town?
Your slain are not slain with the sword
or dead in battle.
3 All your leaders have fled together;
without the bow they were captured.
All of you who were found were captured,
though they had fled far away.
4 Therefore I said:
“Look away from me;
let me weep bitter tears;
do not labor to comfort me
concerning the destruction of the daughter of my people.”

5 For the Lord God of hosts has a day
of tumult and trampling and confusion
in the valley of vision,
a battering down of walls
and a shouting to the mountains.
6 And Elam bore the quiver
with chariots and horsemen,
and Kir uncovered the shield.
7 Your choicest valleys were full of chariots,
and the horsemen took their stand at the gates.
8 He has taken away the covering of Judah.

In that day you looked to the weapons of the House of the Forest, 9 and you saw that the breaches of the city of David were many. You collected the waters of the lower pool, 10 and you counted the houses of Jerusalem, and you broke down the houses to fortify the wall. 11 You made a reservoir between the two walls for the water of the old pool. But you did not look to him who did it, or see him who planned it long ago.

12 In that day the Lord God of hosts
called for weeping and mourning,
for baldness and wearing sackcloth;
13 and behold, joy and gladness,
killing oxen and slaughtering sheep,
eating flesh and drinking wine.
“Let us eat and drink,
for tomorrow we die.”
14 The Lord of hosts has revealed himself in my ears:
“Surely this iniquity will not be atoned for you until you die,”
says the Lord God of hosts.

15 Thus says the Lord God of hosts, “Come, go to this steward, to Shebna, who is over the household, and say to him: 16 What have you to do here, and whom have you here, that you have cut out here a tomb for yourself, you who cut out a tomb on the height and carve a dwelling for yourself in the rock? 17 Behold, the Lord will hurl you away violently, O you strong man. He will seize firm hold on you 18 and whirl you around and around, and throw you like a ball into a wide land. There you shall die, and there shall be your glorious chariots, you shame of your master’s house. 19 I will thrust you from your office, and you will be pulled down from your station. 20 In that day I will call my servant Eliakim the son of Hilkiah, 21 and I will clothe him with your robe, and will bind your sash on him, and will commit your authority to his hand. And he shall be a father to the inhabitants of Jerusalem and to the house of Judah. 22 And I will place on his shoulder the key of the house of David. He shall open, and none shall shut; and he shall shut, and none shall open. 23 And I will fasten him like a peg in a secure place, and he will become a throne of honor to his father’s house. 24 And they will hang on him the whole honor of his father’s house, the offspring and issue, every small vessel, from the cups to all the flagons. 25 In that day, declares the Lord of hosts, the peg that was fastened in a secure place will give way, and it will be cut down and fall, and the load that was on it will be cut off, for the Lord has spoken.”

An Oracle Concerning Tyre and Sidon

Wail, O ships of Tarshish,
for Tyre is laid waste, without house or harbor!
From the land of Cyprus[c]
it is revealed to them.
2 Be still, O inhabitants of the coast;
the merchants of Sidon, who cross the sea, have filled you.
3 And on many waters
your revenue was the grain of Shihor,
the harvest of the Nile;
you were the merchant of the nations.
4 Be ashamed, O Sidon, for the sea has spoken,
the stronghold of the sea, saying:
“I have neither labored nor given birth,
I have neither reared young men
nor brought up young women.”
5 When the report comes to Egypt,
they will be in anguish[d] over the report about Tyre.
6 Cross over to Tarshish;
wail, O inhabitants of the coast!
7 Is this your exultant city
whose origin is from days of old,
whose feet carried her
to settle far away?
8 Who has purposed this
against Tyre, the bestower of crowns,
whose merchants were princes,
whose traders were the honored of the earth?
9 The Lord of hosts has purposed it,
to defile the pompous pride of all glory,[e]
to dishonor all the honored of the earth.
10 Cross over your land like the Nile,
O daughter of Tarshish;
there is no restraint anymore.
11 He has stretched out his hand over the sea;
he has shaken the kingdoms;
the Lord has given command concerning Canaan
to destroy its strongholds.
12 And he said:
“You will no more exult,
O oppressed virgin daughter of Sidon;
arise, cross over to Cyprus,
even there you will have no rest.”

13 Behold the land of the Chaldeans! This is the people that was not;[f]Assyria destined it for wild beasts. They erected their siege towers, they stripped her palaces bare, they made her a ruin.

14 Wail, O ships of Tarshish,
for your stronghold is laid waste.

15 In that day Tyre will be forgotten for seventy years, like the days[g] of one king. At the end of seventy years, it will happen to Tyre as in the song of the prostitute:

16 “Take a harp;
go about the city,
O forgotten prostitute!
Make sweet melody;
sing many songs,
that you may be remembered.”

17 At the end of seventy years, the Lord will visit Tyre, and she will return to her wages and will prostitute herself with all the kingdoms of the world on the face of the earth. 18 Her merchandise and her wages will be holy to the Lord. It will not be stored or hoarded, but her merchandise will supply abundant food and fine clothing for those who dwell before the Lord.

The Power of the Cross: Reconciliation